Ah, the box squat. The red headed bastard step-child of geared lifting. People love to hate on geared lifting, and as an extension box squatting, the most popular comment being "It doesn't transfer over well to raw squatting". This will give you some insights into how to incorporate box squatting into your lifting, even though you are a raw lifter.

First, why box squat. Here are some big reasons:

1) It teaches a person how to load and lead with the hips. Usually novices and most intermediates do not know how to load the hips properly. You either see a full out knee break to initiate the squat, or not knowing how to maintain a tight arch in the back. The box squat teaches you to reach back with the hips and to keep the chest up (or else you collapse). Most beginners cannot free squat to save their life. However, within 5 minutes I'll have them performing perfect box squats. With an external object to navigate to, people are more aware of their body. Removing the box and having them squatting is a simple step after.

2) There is this thing called Rate of Force Development. Essentially it refers to the speed at which force is produced. Sprinters, high jumpers, olympic lifters etc have insanely high levels of RFD. There is research that shows that the box squat produced 3-4x as much RFD than a normal squat (1).


3) Most people have terrible, and i mean terrible, development on the back side of the body. Because the box squat forces you to sit back, it loads the hamstrings and the glutes to the nth degree. In fact, when you do box squats to a depth below parallel, you'll see your quad development actually go down, while hamstring and glute development get to new levels. 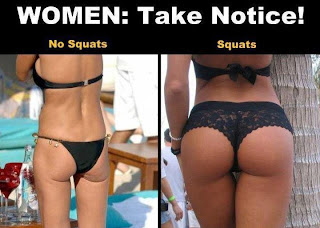 4) Box squatting deloads the knees. I have medial meniscus tears in both my knees and the only way I've been getting any kind of squatting in my routines is by box squatting. Again, because you sit back so much, the knees don't travel at all. This saves the knees and puts all the pressure on the muscles involved instead.

5) Box squatting ensures depth. You'll notice that in most lifters, when the weight starts piling up, the depth gets shallower and shallower. With the box, you have to reach a definite point to know that you've performed the rep correctly.


6) Recovery is a lot easier with box squatting. For whatever reason, you can recover faster from box squatting. According to Louie Simmons, the original members of Westside Barbell in Culver City, California, used to perform box squats three times a week (2).

7) The box squat helps with deadlifting. One is by increasing your RFD (see point 2). The other way is that because it breaks up the eccentric-concentric chain (by pausing on the box), you're forced to create "static overcome by dynamic work". Which means that you need to generate force from a complete stop. Of course this is probably why the box squat increases your RFD.

8) You can set the box to different heights to work on whatever weakness you have. Setting the box very low forces you to build mobility in the hips and adductors, while destroying the hamstrings and glutes. Some deadlifters like setting the box to a quarter spot position referencing the fact that this is the position that they pull from and thus needs to be strengthened.

The next part of this post will reference some disadvantages of box squatting and some misconceptions. Then I'll show you how you can use box squatting in your routine to bring up your raw total.

1) "A biomechanical comparison of the traditional squat, powerlifting squat, and box squat." (http://www.ncbi.nlm.nih.gov/pubmed/22505136)

Posted by thedriveforstrength at 10:29 AM